Mid way through a coaching conference I've gone for a quick email, and Moth news check up, and noted Rohan's latest posting. It will be a shame to not have him there at the Worlds though if this is true, but it will be a very competitive fleet nevertheless.

It was interesting that when there was talk of the Bladerider going Olympic, Rohan said he wouldn't do it because of the time away from home. Instead his job with Bladerider has had him out of the country far more than any Olympic campaigner, and this is a tough way to live.

Haven't had time to write up news of the Poole open, but will shortly. Good fun event, well organised and attended. Thanks to all those who helped!
No comments:
Email ThisBlogThis!Share to TwitterShare to FacebookShare to Pinterest 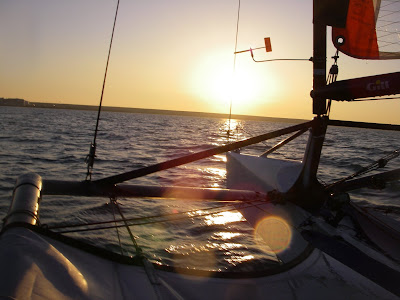 Had a great evening sail today. Just cruising around, enjoying going sailing. I only got out for 30mins, but it is worth it everytime as soon as you lift off.

But, my Moth sailing efforts have scuppered my Jules Verne attempt - Alex Adams has registered as well, and got straight passed me. We are both stuck in the same calm patch though in 7046th and 7061st.
No comments:
Email ThisBlogThis!Share to TwitterShare to FacebookShare to Pinterest

I'm a bit of a fan of the current Jules Verne Record attempt underway by Groupama3. They've not had much luck with the weather so far, yet are still over 500 miles ahead of the current record. With 30 knot average speeds possible it is pretty impressive stuff.

So while checking out the latest news on the Groupama3 website today I found the virtual game. I remember the Volvo, or was it Whitbread race a while ago had a virtual; race, and my flatmate Dave and I were hooked. So I've registered, and my new Trimaran and I are currently stuck in a calm patch of the Cape of Good Hope in 6846th!

I've turned the autopilot on though, so I'm off Moth sailing!

http://julesverne-groupama.virtualregatta.com/
No comments:
Email ThisBlogThis!Share to TwitterShare to FacebookShare to Pinterest 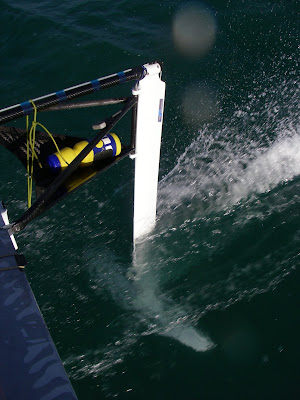 Had a bit of a media frenzy on the boat today with a video camera hanging off the bow, and also my little Pentex waterproof camera in a pocket.
We've all seen it but I don't think many people have thought to reach for a camera when it happens, so here is a nice little photo of a rudder with a little bit of ventilation!
Furtunately with the fence near the bottom I was able to keep control through this, take the photo and sail away (all on video as well!).
No comments:
Email ThisBlogThis!Share to TwitterShare to FacebookShare to Pinterest 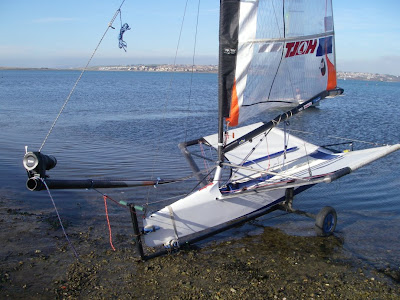 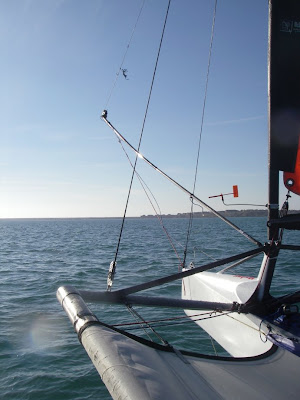 It was a glorious day in Weymouth, and I thought it was time to try and get some new onboard footage with my new little ActionCam thingy. The field of view isn't great so I thought I'd go for the long pole option! This had the added benefit of being able to be adjusted on the water for multiple angles.
It was a good first test, and I've got plenty of ideas on what to do next time.
Better get editing....
No comments:
Email ThisBlogThis!Share to TwitterShare to FacebookShare to Pinterest 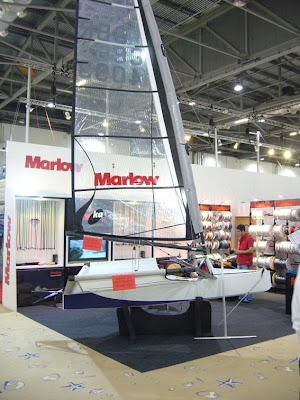 Paul Honess from Marlow has just emailed me to send me some photos of my boat on their stand at the London Boat show, and to say cheers for the boat loan.
Started to play with a new variation on the paint scheme, but think I need to finish off with a stripe or something. Any thoughts?
No comments:
Email ThisBlogThis!Share to TwitterShare to FacebookShare to Pinterest

I'm now back from Miami in sunny Weymouth. I'd been getting loads of reports about how bad the weather has been whilst away, so it looks like we've got lucky!

Miami was a long haul that went well. The US Midwinters and the OCR were forming part of the 2.4 trials for the Beijing/Qingdao Paralympics in September so we went out early. The Midwinters were won by Helena Lucas, with Megan Pascoe in third on equal points with Stellan Berlin, an able bodied 2.4 sailor from Sweden who is a multiple Open Worlds winner. So a good first regatta for the team. Then in the OCR Helena was 4th (3rd in Paralympic fleet) and Megan was 7th(4th Para). We await the official selection announcement this week.

Coaching at a trials with two such good sailors is very hard. One will come home happy the other very upset. I guess it shows the talent in the UK when we are faced with the fact that we have two of the best Paralympic sailors in the World, and only one will go to the Games. It is a sad fact about our sport. I remember before Sydney the top two Tornado helms in the World were the Austrian Hagara brothers, and yet only one got to the Games, and he won Gold.

This year in Miami seems to have been a good one for catching up with sailing friends from so many areas. I caught up with Dave Perry, Mark Strube, Andrew Lewis, and Mal Parker who were all at Victory Challenge. Mischa Heemskerk who was our Dutch Tornado tuning partner was out seeing his American girlfriend and sailing a Hobie Tiger. Stan Schreyer another Tornado mate from a few years back was actually coaching an American skud team. Susan Veal, sister of a Moth sailor a few people may have heard of was also passing though on route to Key West, so we met up on South Beach. It is a small sailing World as Susan was off to sail a Melges 24 with my old Tornado Helm, Hugh Styles. It was also good to meet Brad Funk, and Bora Gulari, two new America Moth sailors. Just a shame I never managed to properly get out on the water with Brad as he dived off to the Laser Worlds.

I arrived back into Heathrow to be picked up in style by Ben from Carbonology who'd beed good enough to delivery my car and boat to the airport for me after they looked after my boat following its London boat show Marlow display. We got a lot of funny looks driving the Moth trailer round Heathrow, and I had one guy pull up alongside, signal to wind my window down, and proceded to ask loads of questions about the boat!

Over the next few days I'll try and shake off the jet lag, and might go for a spot of Moth sailing while the weather is nice!
No comments:
Email ThisBlogThis!Share to TwitterShare to FacebookShare to Pinterest
Newer Posts Older Posts Home
Subscribe to: Posts (Atom)