Sad news on the home front. My faithful red Peugeot died on my shortly before leaving for China and had to be scrapped. Mum and dad's Ford Focus has now become the new Moth tow vehicle. (Just need a towbar in time for the weekend.)
But there is good progress on the workshop front, with new oak doors made and fitted by Dad and myself last week. (Whilst my Mum converted the garden back from a jungle - Thanks!)

So the Moth work going on at the moment is:
Some 'Envy' mods ready for the Tide Ride this coming weekend, then 'The Carbon Footprint' then becomes the priority project. As a result 'The Weapon' is on the market if anybody is interested. I'll post a full add on here soon, but she's currently in the workshop for a tidy up, and respray before finding a new home.
No comments:
Email ThisBlogThis!Share to TwitterShare to FacebookShare to Pinterest

The vote on what classes will be used in the 2012 Paralympics in Weymouth will be soon, and it was a shame to here rumours that the 2.4 may not be so certain of the one person slot. While I believe it is the perfect boat for even close tactical racing it will be up to IFDS to decide. (And if you thought ISAF made some strange calls.....)

But what if we wanted a really high performance boat for the Paralympics? What about including the Hobie Trifoiler, and sailing rings around all the old slow Olympic classes?

Or what about putting a kite on it?

I was interested to see Sailing Anarchy posting a pic of a new foiling cat launched in Switzerland today. A google search later revealed a few more interesting foiler finds... and this website: http://foils.wordpress.com/ 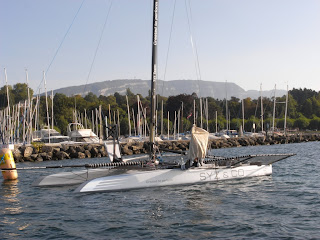 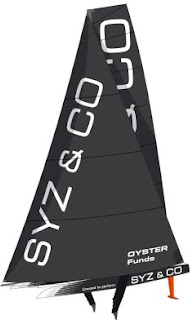 How about an lake version of Hydoptere? 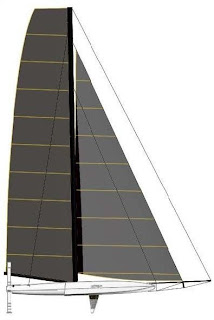 Meanwhile the big version is back on the water amidst a Mistral in france about to have another crack at 50knots which was so close to being beaten by a kitesurfer recently at 49.84k! 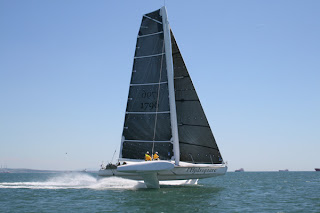 Check out this video with footage throughout the Hydroptere project. (Great crash 2mins in...)


Hydroptère
by Lepsounet
No comments:
Email ThisBlogThis!Share to TwitterShare to FacebookShare to Pinterest

With the Paralympics now over, and containers packed it is time to catch up on some stuff before we head to Beijing for the closing ceremony. I'll do a seperate post on the event as a whole and our time out here, but today I was on a mission.

My workshop is pretty well sorted, but one thing I've been lacking for a while is a vacuum pump. I'd been told that ebay was the place to find one, but I've struggled so far. Then I saw the RYA had a shiny new one out here in our pimped up workshop container....
So after a long day of container packing (not helped by the very late night last night!) I headed into Qingdao. Not that this was an ordinary shopping trip though. I had a private driver, and an interpreter! Just didn't know were to buy vacuum pumps in town though. But I had a picture of one to point at! A great feature of this town though is that they have streets of all the same type of shop, so we headed to 'tool street' Renmin road, and after a few phone calls to a mate of the driver we'd tracked down a tool shop that could have what we were after! Lots of pointing at the picture and discussions later it was looking promising and I was shown an example of one he'd be able to get me. So while I dived off to a cashpoint machine, one was being delivered to the shop! The shop owner and numerous assistants then plugged it in to show it all worked, and then got one of his guys to take it to our car.
Quite a succesful mission, if not a slightly weird experience. 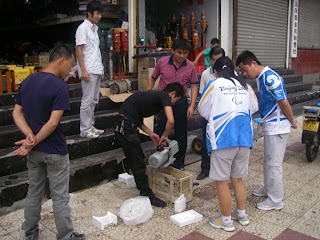 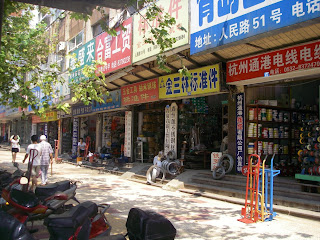 I wish I'd had more time to investigate the whole street as there are so many cool shops. If you wanted ball bearings, you could got to the bearing shop, or wheels, how about the shop with nothing but caster wheels? 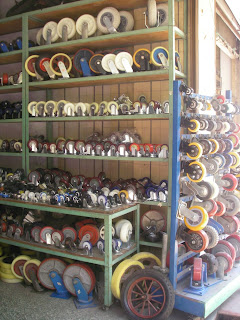 The freeboard was more accurately taped out and cut, (very disappointed my pink tape wouldn’t stick). Some high pressure cutting later. If you squint and the light catches her right you can just about imagine she might look mike a foiler, hurrah.

Cups of tea so far: 3 (doesn’t really count as it got left to go cold in the excitement)

Weight: Going down, but shouldn’t have had that cream cake.