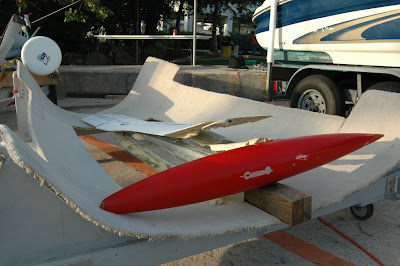 We often read about keel issues on Open 60's and Volvo 70's but check this out for a keel problem at the smaller end of the scale!
This was the keel of a Canadian Skud 18 during Miami OCR. The Skud 18 is a 2 person paralympic class designed by Bethwaite. It has two seats on the centreline, a fat 49er style hull (on a keel boat that heels? but don't get me started on the many issues with this boat!) and basically a 29/49er style rig on it.
The Skud fleet had been having keel issues in Miami anyway as it is actually quite shallow in our race area and several had been hitting the bottom. There were lots of scratched bulbs, and one fin failure that looked like it had hit the sand, and then been tacked on, and twisted the bulb, which cracked the lower portion of the fin. A local boat builder glued it back together but the bulb no longer pointed fore and aft!
Many thought the keel photo above of total destruction was due to hitting the bottom, but there was no sign of damage to the bulb, and it turns out that they were on a high speed tow, very close behind the rib. I wonder if this is a case of flutter? The prop wake interacting with the fin started a resonance that got the long bulb moving, and the fin that has very little torsional rigidity couldn't handle it.....
Either way it was an impressive bit of damage for another light wind day in Miami!
No comments:
Email ThisBlogThis!Share to TwitterShare to FacebookShare to Pinterest

We had an interesting case of extreme band manners and potential unsportsmanlike conduct in the US 2.4 Midwinters. I wouldn't report on it except for an interesting boat measurement issue a few years back involving the same person.

During race 2 of the Midwinters the French 2.4m team joined in the racing, having sat out and watched the first race of the day. Nobody thought much of it as many teams were just using the Midwinters as training for the OCR. FRA 13 Damien Seguin won the race, and decided to miss out the next one. Fair enough, he's got good speed in those conditions, so headed on it. On the scoreboard that evening it was noted though that neither French boat had actually entered the regatta. No entry form had been submitted, no payment received, and no contact made with the host club or the class representatives at all. Yet on day 2 of racing they joined in again, having still not entered or made any efforts to react to the information clearly displayed on the noticeboard. Mixing it with the fleet on the startline, and influencing a lot of people's races. The fleet made their thoughts known on the water! The committee boat sent a mark boat over to FRA13 to question about this conduct. I don't know what was said, but a rather frank exchange between the mark boat and the committee boat was heard over the open VHF channel for the regatta discussing that the mark boat was spoken to so rudely that they'd like to take rule 69 action against him! (This encouraged a cheer from all those listening in on channel 11! which included competitors as well). FRA13 was aware he wasn't entered, as was made clear by his token effort of not actually finishing the races. Yet he'd influenced many people on the race course up to that point. His coach boat did go in during the day to try and register, but in how many regattas can you go ashore and enter on the second day of competition?

The race committee had politely asked them to leave, yet both French boats continued to join in the racing. At this point the race committee were in touch with an International Judge on the shore asking for advice on any possible course of action. I think rule 69 was out because they weren't competing in the regatta, but fundamental rule 2 was an option.

Once ashore after racing the race committee filed a report of unsportsmanlike conduct against both French boats, and submitted it, along with letters of complaint from over half the fleet to the International Jury that was in town for the Miami OCR starting the next day.

When it was clear the fleet and committee were not happy, various excuses such as 'my credit card wasn't working', and 'can we pay now?' came out, but in the eyes of the fleet and organisers it was all too little too late.

They were called in to meet with the Jury but nobody knows what happened next.... Probably just a telling off, but at least they were called up on it.

The interesting element to this is the measurement fiasco of the 2005 IFDS Worlds just after the 2004 Paralympics.. Involving FRA13... Where during an inspection before the regatta his boat was found to have extra metal in the keel. With the lead taken out, the metal detector still beeped when run over the keel! As this was a pre-regatta inspection to clarify some measurements for a rule amendement no official action could be taken. He wasn't allowed to use the boat in the regatta and borrowed another French boat (an old one of his) to compete (and win) in. Everybody knew this was the same boat that had just won the Gold Medal in Athens. The initial response was that the keel had been damaged after the Paralympics, and the builder must have done something.... Then we later hear that it had been argued that it wasn't the Athens boat.

But then we are starting to get into dinghy park rumours. The key thing is where is the official IFDS / ISAF report on the investigation into this matter?

Mr Payne has got himself a blog, and it is very well written. It fact so well written that I think it will become the blog of choice for Mothies around the globe soon, if he continues to update as he has whilst down in Perth.

While busy with coaching duties I'll continue to blog my random news so Mum and Dad at home can see my latest pics (Hi Mum!), and then once home I'll ramp up the Moth news as there is much to report.....

New boats, new designs, new ideas, and lots of exciting stuff. It is going to be a great year of Mothing.
No comments:
Email ThisBlogThis!Share to TwitterShare to FacebookShare to Pinterest 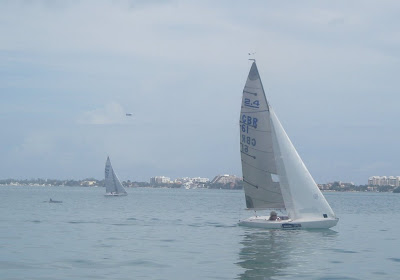 All is well in Miami. We start racing in the US Mid Winters tomorrow with 5 races a day! It has been busy logging up plenty of hours on the water. We've had plenty of sun, a variety of breezes, some massive rain clouds, and a few dolphins join us on tuning runs. Managed to catch a Miami Heat basketball game the other night as well which was quite a laugh. 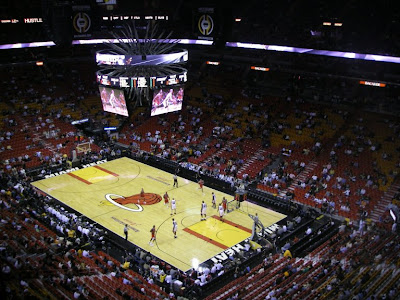 It was a chilled day today so I caught up with Iain Percy and Andrew (Bart) Simpson who were launching their new Star. It is an impressive bit of kit. Loads of very neat touches, and a cool Union Jack blended into the Skandia logo. But....
Skandia have changed their corporate logo to Green! Supersticious sailors won't like that!
I tried to look into why sailors don't like Green on their boats, and all I could find was the story that fishing boat skippers will not abide a green plant in the wheelhouse. They say plants seek the earth and that’s not a good characteristic for a seaworthy vessel. Wherever it comes from there will be a few sailors within Skandia Team GBR pondering the colour.......
Update - no sooner had I posted this than Mr Payne came back with the answer: Boats that are green are unlucky because boats that carried explosives in the war were painted green.. So with U boats around it was unlucky to be in one! 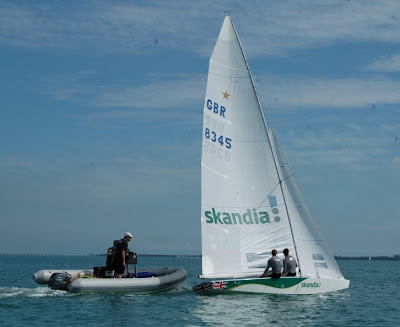 I couldn't help myself, there was a Moth in the dinghy park that needed help to fly again, so I had to get my hands dirty. I helped Brad Funk fit a new centreboard linkage piece yesterday, and this afternoon I repaired a crack in his rudder stock.

While I was down there I met Bora Gulari, who was passing through Miami on route to Key West to race Melges 24. It was cool to meet him, and catch up with news from the Aus Nationals.
No comments:
Email ThisBlogThis!Share to TwitterShare to FacebookShare to Pinterest

Managed a morning off today and got out to the Everglades for an airboat ride and a trip to Gator Park. (Who can remember the TV show Gentle Ben?)We've talked about doing it for the last few years we've visited Miami, so it was great to do it, and see a bit more of the surrounding area. 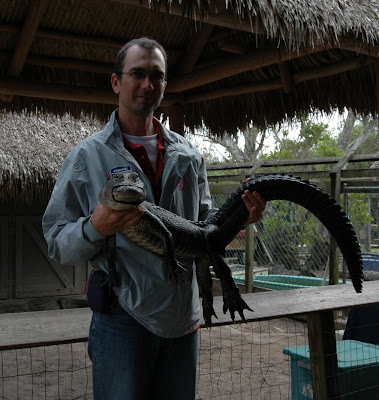 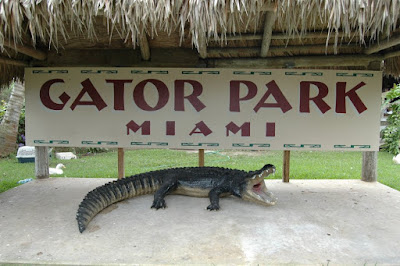 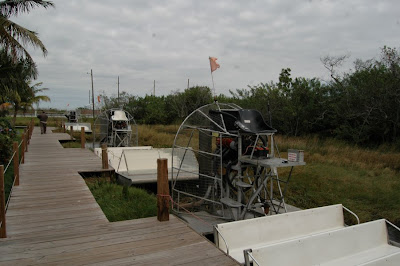 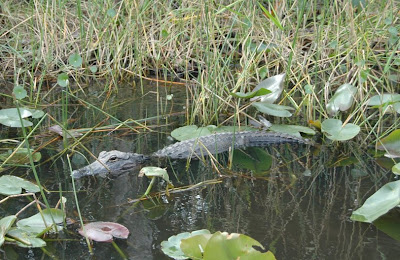 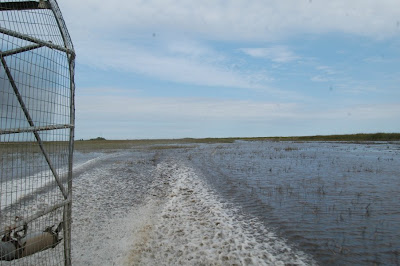 Congratulations to Graham Vials for winning the 2008 Bloody Mary. A great result in far from ideal conditions for a foiling Moth. Graham told me there was about 4-10 knots, and much of the race was low riding, yet he started behind the International 14's and sailed through to win.

[He didn't collect the official prize due to debates over official PY numbers, but what the hell, it's an impressive performance.]
No comments:
Email ThisBlogThis!Share to TwitterShare to FacebookShare to Pinterest 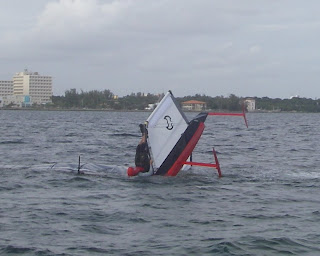 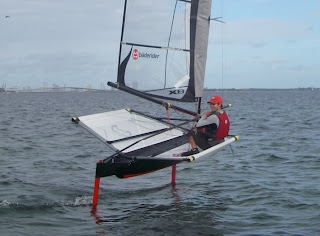 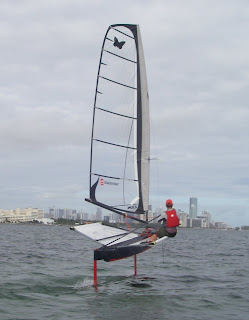 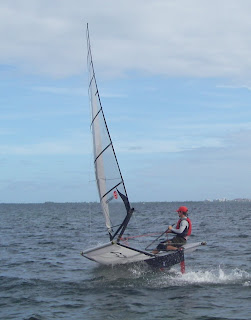 On our way in yesterday after a long day on the water with the 2.4's I caught up with Brad Funk as he sailed past on his new Bladerider Moth. He was having a few control issues so pulled up alongside. It turns out he'd broken a connection piece in the main foil a few days ago and in making a new one hadn't checked his foil set-up before sailing again. He therefore had a lot of lift, and no ability to turn it off! His wand was about 45deg out, and made for an interesting bowsprit at times! Note to all newbie foilers - remember your pre-flight checks!
I'll try and help him make a new one to get him back out with some control next time.
Feels funny to be in a rib watching a Moth instead of the other way round.
No comments:
Email ThisBlogThis!Share to TwitterShare to FacebookShare to Pinterest

While I'm out in the Miami sun my Moth will be on the Marlow stand at the Excel London Boat Show.
More good exposure for the class hopefully.
No comments:
Email ThisBlogThis!Share to TwitterShare to FacebookShare to Pinterest

After quite a wait due to a few paperwork issues within Peters and May, and a Christmas container backlog we've finally got our container. Phew.

Hello from Miami. I'm out here coaching my 2.4 squad for Miami OCR, and we've come out early for some training. Unfortunately we've been waiting for our container now for several days.... 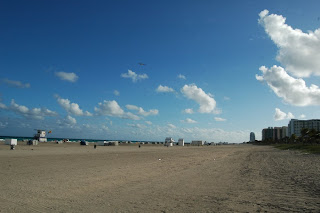 I met Brad Funk with his Bladerider down at the US Sailing Center the other day, and got chatting to him, so will get out on the water with him hopefully soon to help him get up to speed.
No comments:
Email ThisBlogThis!Share to TwitterShare to FacebookShare to Pinterest
Newer Posts Older Posts Home
Subscribe to: Posts (Atom)