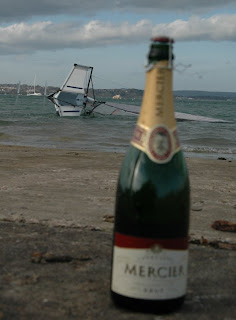 I've been really poor on the blogging front recently. Loads is happening that I want to report, but don't seem to have time to write about it, and want to do it all justice so put it off until I have time, and then never do.
So in brief, we launched the prototype Velociraptor last week. It was a day of sitting around waiting for the breeze to drop.
I logged some more time in it yesterday, and I'm happy with the shape, the general feel and its stiffness. Did my little torsion test on it, and its stiffer than my last boat, which was already quite stiff. We've confirmed our tweaks for the more production version. So my Worlds boat is in production while I'm away in Hyeres, and China. Quite nice to have had a test boat to try some ideas out on.
Logging loads of time in the 2.4 at the moment, doing tuning runs against the girls in a new boat. Frustrating to not be in the Moth, but a very interesting way to get to know the breeze in Portland harbour. Travelling at 3.8 knots with a compass and a nice jib in front of you makes the shifts a bit easier to spot than flying along in the Moth!
In other news I heard the other day about an interesting rather classified hybrid hydrofoil big boat project, that sounds very cool. It goes public in the next Yachting Monthly. So hydrofoils in one way or another are taking over!
Email ThisBlogThis!Share to TwitterShare to FacebookShare to Pinterest