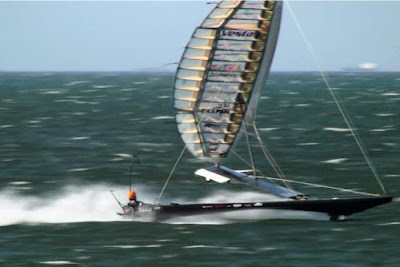 9 Days is how long Paul Larson and the Sailrocket team have got before the team from the WSSRC turn up to validate their speed runs. They've been getting around 45 knots out of Sailrocket for a little while now, and I really hope they can squeeze a bit more out of her on some official runs. They've got a number of tweaks to help, so fingers crossed the weather is kind to them.
Exciting times in sailing at the moment. Two round the World races going on, and numerous records being smashed. Congrats to the guys on Ericsson 4 - achieving over 600 miles in a day is very impressive! Hydroptere are going strong with improvements on a few of their records, although still short of 50k. The kitesurfers have done over 50k now, but the WSSRC have yet to validate it..
And I read today that at the SYZ & CO Leman Sailing Speed Records Award Ceremony, Geneva, Switzerland, Jean-Pierre Ziegert in his foiling Moth won the Kilometer record with a speed of 21.90 knots. Beating the Mirabaud LX foiler into second.
Email ThisBlogThis!Share to TwitterShare to FacebookShare to Pinterest