A day of two solid results and then frustration with picking up two plastic bags in the third race. 8th overall after four races. I'm happy enough with that.
The first race started in foiling conditions, but the beat was light - we were sailing some big angles upwind, and it was all about staying foiling. It was light at the windward mark, and I think everybody was lowriding in the area. I rounded the top mark around tenth but felt I was really close to getting up onto the foils again, so carried on upwind a fraction beyond the spectator boats into some pressure. I held my breath and up we went. It was a tricky run, but I kept it up, and made the gybe to be pleasantly surprised to find myself on the layline. Getting close to the target time, the race was finished at the bottom, and I'd got up to 5th. Amac won, having turned around on the run to go upwind a bit to get up onto the foils!
Race two had more breeze, and I was happy to have a good start, round the top in sixth, and stay there for the race. Amac showed great up the beat, but overstood the layline massively, and left himself quite a job to get back. 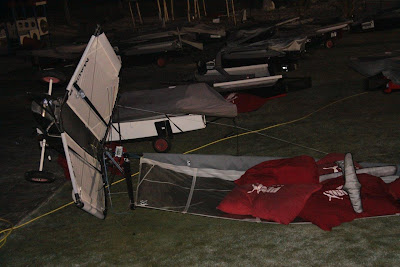 A secret to his speed could be his early prep - leaving the boat rigged overnight last night meant he was rigged and ready before anybody this morning!

Race 3 was held in more breeze again, and the usual suspects started to show through. I had an okay first beat to be looking at a 10th ish at the windward mark only to hit a plastic bag, and drop off the foils. I had to capsize to clear it, and was back in the late teens. A good run though saw me back into the mix a bit, but playing the left up the next beat was not a good move and the pack I'd got down the run had go passed me again. I then hit another plastic bag on the stbd layline, and had to capsize again. I clawed passed Alex Adams on the final beat and after a battle down the run beat him to take 16th.

After racing I met up with Shirley and the CNN crew to give Shirley a go in a Moth for their next CNN Mainsail show. (Only fair given that I got to sail her VX40 in Hyeres last year.) Bora had done his bit trying to get her foiling yesterday in very light winds yesterday so I was the reserve today. We got lucky with the breeze though, and she was happily foiling around. Should be a good little piece for the class.

It has made me laugh at this event though that part of the Moth event experience now is the media interviews! I think I've seen everybody from the top 15 being interviewed for some TV show, website, local paper/magazine or online broadcast! Si Payne headed off after racing to do a local TV interview and came back with make-up on!

Oh how the class has changed. 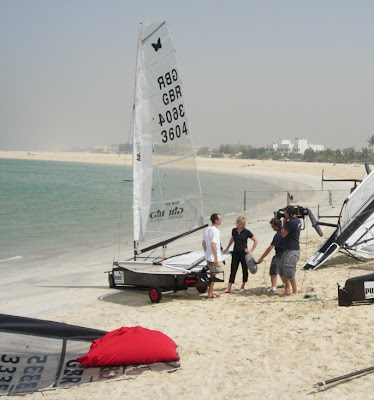 What hasn't changed about the class is AMAC's ability to stay rigged overnight!
t seems this regatta that the new fashion is that you need to be old to be up there...