Back in the UK, post AC, and time to catch up on so many things!

I thought I'd fire up the blog again, but it might be a little bit of a random selection of topics initially. Time for the blogs to make a comeback.

Life was so hectic up until the end of the AC that I didn't get a chance to finish off my Moth upgrades. With no Moth sailing for years, and Garda straight after the Cup, I focused my summer sailing plans on another foiling boat; the A class.

I'd been following the A's for a while to be honest. They had always appealed with their light weight efficiency.

During my time in Valencia actually I'd been pondering a foiling cat project before foiling cats were a thing! I found a perfect old boat to convert and got it to the base. After a few evening sails with the small fleet from the office I realised what a great light wind boat it was, and decided to keep this one as a traditional A, and look elsewhere for my foiling conversion boat.

That project is another story, that hopefully I now will have time to finish, but back to the more normal A.. It eventually went to San Fran, and did a little bit of sailing there, with various upgrades along the way. Firstly to curved boards, and then tips on those boards to enable it to foil.

The AC workload got in the way and I needed to move the boat on before heading to Bermuda, but I followed the foiling developments with interest.

I'd kept in touch with Gonzalo Redondo, who was with us at Artemis for the 34th AC, and he'd been putting a nice package together with Jakub Kopylowicz of Exploder boats in Poland, so I ordered one for after Bermuda.

Rigging a new boat at the Worlds is never ideal, but Stevie Brewin and Simon Nelson had been stars and given me plenty of pointers ahead of time.

The Worlds was fun to be racing again. I had moments up at the front of the fleet, and some near the back! Speed was good enough I just needed to get off the start line! 21st overall was the end result.

I'd opted to go for the shorter mast, and lower CE mainsail, because I think that is the direction the class will go with foiling. (And it was quite nice for my weight!) I struggled a bit in the light, but I think that was more in set-up, and it was early days. 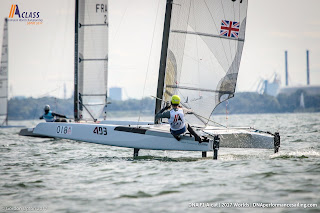 Only a week or so after the Worlds it was straight into the UK Nationals at Stokes Bay. Two drifting first days demonstrated how good the UK fleet is in the light, and how fast the classic boats still are! I got to experiment with my set-up a bit more than I was comfortable to do at the Worlds, and I found another gear in the light which was useful. As the wind got into foiling range I was in my comfort zone, and won every race in which I could foil downwind.

With the Worlds in Weymouth in 2019, and the Nationals here in 2018 I'm looking forward to a load more racing in the class, and pushing forward with development ideas.

Barts Bash was next on the regatta list, which resulted in a battle of the Star squad. John and Anna won in the Nacra 17, with me in second, and Iain in the Star in third. No foiling for me in this race, but at least the A cat in this stuff is quite pleasant. The Moths were battling with the Oppies and Mirrors! 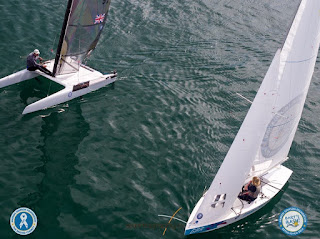 More detailed photos of the boat soon. The modern A cat with mainsheet and traveller hidden inside a double surface tramp is quite nice. If I was racing an F18, I'd be taking a much closer look at what is going on in the A cats. It is not just about decksweeper sails and foiling.

So to finish off with a general update, so I can dive into some more boat related stuff in future posts, I'm taking a nice break from the AC. There is always a natural break in between cycles, but having been non stop for the last 7 years in the AC bubble it is refreshing to take a step away. With a return to monohulls, there are others more qualified than me to be involved early so I'll watch and see how things develop.

I'm enjoying being home, and working on a number of design projects alongside a load of British Olympic squad member coaching.