Well it had been joked about in the Moth fleet for quite a while, but when I mentioned it to Katherine she was determined to try and be the first to do it. Would it really be possible to get an Optimist dinghy up onto foils? How fast can you get one to go? A Moth takes off at around 7/8 knots. Could you get an Oppie up to that speed? It can get to ~5 easily enough, would the foil assist make the difference for that last nudge towards folborne flight? It hardly has the streamlined shape like a Moth, its a bit heavier, and the rig slightly smaller! It does measure as a Moth though - with only the addition of a Moth logo you'd be fine.

Oh well you'll never know if you don't try. We saw an old wooden Oppie for sale locally going very cheap so we got hold of it, and it sat in the workshop for some time. It needed a bit of work to even get it back on the water. The rowlocks and seat are not essential foiling equipment! Katherine was let loose with a power sander, and various pots of paint and varnish while I pondered how to fit the foils from 'Carbon Footprint' into this vintage wooden Oppie.

Aside from the renovation work required, the actual conversion to foils only took a weekend of bimbling. The aim was to use as much as possible from the Moth, so the foils, gantry, and wand could just plug on. In order to use the same cable from the Moth, and get the wand out in front of the boat and main foil, we made up a little bowsprit. A bit of glass fibre fishing rod, and some carbon supports from the scrap bin and we were there. The gantry was bolted to the transom with some little carbon brackets I laminated up. The main foil fitted through the existing centreboard case (just!) and a cover plate to mount over the open case on the underside of the hull was made up. The exact profile of the board was then cut out of this. (The 'speedfish' as
dubbed by Katherine) The whole boat was assembled in the workshop. (great when you can actually get the mast up inside!) foil angles checked, and then all loaded into the back of Katherine's Transporter van. A useful travel feature of the Foiling Oppie concept! We then had to cope with Katherine getting rather excited by the whole idea of this test pilot lark while we waited for a weather window...
Last Saturday turned out to be our chance to try it out. On the upper limit for Moth sailing, with the training weekend cancelled due to a horrific forecast for Sunday we went for it. Still unsure if this would really work or not we went for a stealth approach, launching off one of the pontoons. This was partly due to the fact that the Oppie hullform does not lend itself very well to being launched on its side, and righted in the water in typical Moth style, so we put the foils in on the dock, and rolled the boat in to avoid an early fill up.The rig was then lifted in, and our eager test pilot was released from the dock trying to remember how to sail an Optimist, and wishing we'd put some grip in the bottom of it! 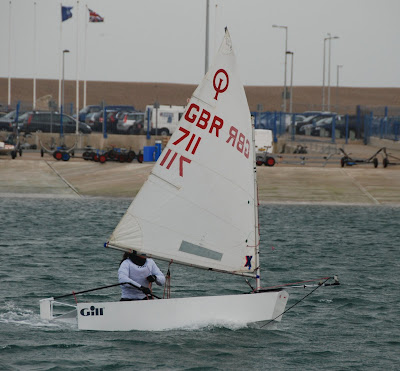 It certainly didn't leap out of the water like the Moths do, but it showed potential early on, nudging its nose skyward. We were struggling for rudder lift, and wound the gantry as far fwd as we could. It was after this tweak that Katherine sailed out to the entrance, caught a big gust and the Oppie launched itself to max height on the foils. I was unfortunately still walking back to my camera, and missed the max height photo, but got to it in time to get the crash that followed. Any foiler will recognise that as a crash from height! 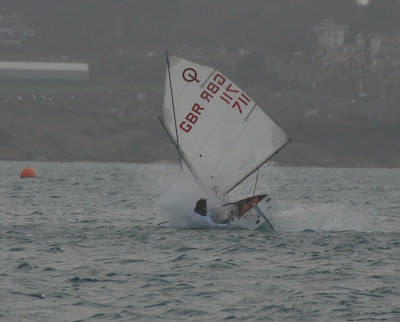 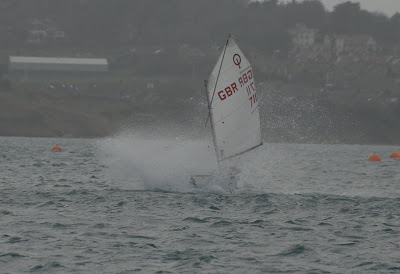 We'd had visions of the rig falling down, or bits falling off if we had a crash but if you ignored some cracking wood noises all was fine. 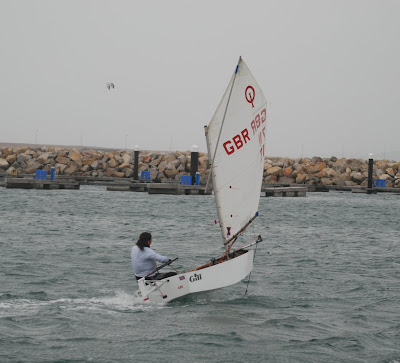 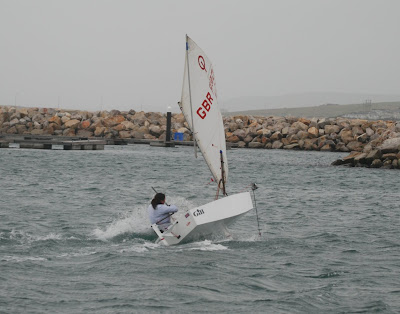 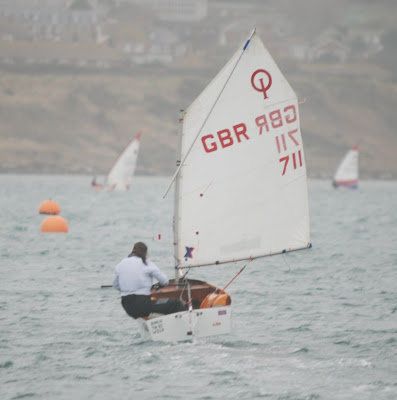 We tried several more times to get a decent photo of it in the air inside the marina, and although it was clearly working I never managed to get the shot with foils clearly visible. There just wasn't enough wind inside to do it, and we were still struggling for rudder lift. We called it a day, happy that the whole idea wasn't so stupid after all. Next time we'll get a rib, and just send it out into the harbour looking for more breeze.
Phase two is lined up already, with a much bigger rudder ready to go and a new North sail. Unfortunately it is unlikely to be until the New Year, but watch this space...
Foiling is fun!
--------------
I should probably finish with a health warning! It is probably not recommended for every Oppie dad to now go and plug some Moth foils into their kids Oppie! Although great fun to do, the narrow foil spacing, small rig, flat bow and launching issues do not make for the ideal first foiling boat! This was only ever intended as a one off proof of concept joke!
Email ThisBlogThis!Share to TwitterShare to FacebookShare to Pinterest

Brilliant! As a recently-ex Oppie Dad, I've been wondering when it would be tried. Even considered it myself but..


Now with a lighter hull (must be some lighter GRP ones around) and a deeper sail, you could do even better!

Keep up the bleeding-edge research - I wait with baited breath.

Hi Adam, can you drop me a line about these pics at photos'at'yachtsandyachting.com

amazing i sail oppies and want to try it ........do you just swap foils or is it more complicated than that?

Cool I want to try it too .......As an Optimist sailor myself I think it would be really cool!Do you just swap the foils or perhaps it is more complicated than that.Dad sails a moth so it would be easy to get hold of the foils