It has been a busy time in the World of wings. The 34th America's Cup will now be raced with wing sailed cats - making the Moth the perfect feeder class!

It has been a bit of a hectic period recently, but I managing to get my boat back off Katherine for a few minutes on Sunday and went out crash testing the wing! Before I do a few mods I've got planned, I thought I'd to take the opportunity to really learn about the weak spots in a structure like this, and find out what bits need reinforcing, and which bits are fine. I'd start with some basic capsizes, and work my way up to some bigger moves! The skin is coming off, and some ribs being replaced anyway so I might as well learn about the survivability beforehand.


The initial test was to let Katherine have a go.... It survived that, so I had to work a bit harder. (See her blog http://www.foilingboatadventures.blogspot.com/ for the more colourful (pink) version of events soon)


I capsized, and stayed there for 5 minutes to see how much water would get inside. Hardly any was the result. More in the trailing element actually, and that should be sealed, so my control line entry points obviously worked okay on the front.


The C Class guys actually punch holes in the skin to drain the water out when they capsize as otherwise the water rushing down inside the wing can take out numerous ribs on its way down! Fortunately a well sealed wing laying flat in the water prevented the need for this, and stage one was passed.


Whilst capsized, I did the walk to the transom and flipped the boat over the transom. This is a nice way to load up the leach element! Five of those and still no cracking noises!


Okay time for a little party trick.. I thought early on that with a fully sealed leading edge structure, I'd have a nice buoyancy tank in the rig! Actually the volume of it would probably hold my weight quite well, and it was pretty bulletproof...


Not a typical load case, but a good example of the fact that these structures can be made quite tough! 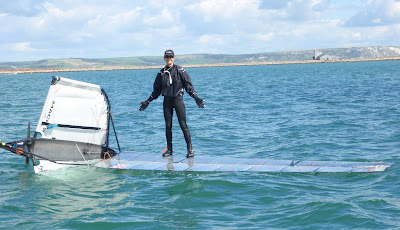 It survived that fine, so with the wind picking up a bit, I tried for some pitchpoles! Of course this is quite hard to do when you actually want to do it! But I managed one eventually, and although it made a good splat noise as the leading edge hit at pace, all was fine, and we came away from that one unscathed.

So back to the workshop for a few mods, although I think pondering over 44m versions will be taking up a fair bit of my time soon.