And another year passes….. Wow really been in a bubble here.
Not doing so well on his Blog lark. I’m not a great facebook poster either, and I don’t do twitter so I’d better get back into this blog.

So plenty to report in the world of foilborne adventures. The AC continues to keep me incredibly busy. We upgraded our original AC45 foiler with a new incarnation, and then followed that with a sistership. The “Turbos” are quite a weapon of a boat and would beat an AC72 round a course now. Firmly set up in Bermuda now, and it is quite a foiling boat playground!

The main project at the moment is my new commuter boat. Living near the water now, and with our base being in the middle of the Great Sound, a commute to work via water seemed like a good idea. I’ve done it a few times now by kayak which is nice, but it was time to get a powerboat. Chunky plastic boats with big engines was the trend, and not really my thing, but then I remembered a Paul Bieker designed kit I’d seen a few years ago. Efficient hull, wooden construction, small outboard that is good on fuel. So with a strange bug to go straight into another build project after finishing my kayak, I ordered a kit. I did all the flat panel and prep work in Alameda, and then I’ve been finishing it off in Bermuda. It looks like a boat now, and is into the final stages of sanding and painting. 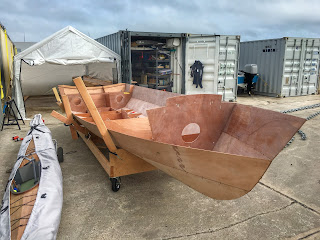 In Moth world I bought a new boat for the Melbourne Worlds, but I was far too busy in Alameda so didn’t attend. I’ve only recently found time to even rig the boat, and it will go in the water soon. I think the Bermuda regatta in December will be the focus. Quite a few little upgrades and mods planned…

My foiling A cat has been good fun, but sadly not everything could fit in the container over here. I did a full foiling conversion on an old Flyer 2, taking it out of class by sticking some extra tips to the daggerboards and making it into a foiler. It was fun to learn a new flying boat, and I’d like to do more in the class. Nice to see many of the things I’ve had in my sketch book for a while appear on some of the new boats this year.

I’ve got another foiling cat project I’ve had sitting in the background for a while now. I drew it up back in 2010 before this whole foiling cat thing really kicked off. I think the concept has stood the test of time though and I haven’t changed anything from those original drawings. I just need to find the time to finish it. It is based on an A cat platform, but will be supercharged and for two people. Full blog post on that coming soon, but here is a teaser: 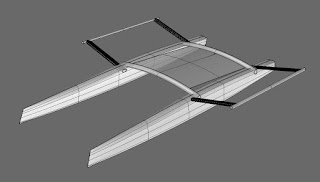 A project at the end of last year was a place to store all my watercraft. I bought a 20ft container, fitted shelves and a workbench, and now have my own mini workshop. With a solar panel on the roof, I’m totally off the grid, and self-sufficient.

For the trip to Bermuda I had a Moth, Moth wing, kayak, A class, and all the panels for the PT Skiff. (Oh and some furniture thrown in as well.)

Not sure when I’ll post again, but I miss the days of Moth blogging. I’m thinking Instagram may be my platform of choice. I’m more of a photos person.
No comments:
Email ThisBlogThis!Share to TwitterShare to FacebookShare to Pinterest
Newer Posts Older Posts Home
Subscribe to: Posts (Atom)