Oops, It’s been a bit longer than planned between blog posts!

Bumping into some old F18 friends in Plymouth reminded me that some people do actually read this stuff, and are interested in what I’m up to, so I’d better make an effort to update it.

So what’s been going on? Well I’d made my Moth wing, but unfortunately a hernia operation prevented me from going to the Worlds. Although disappointing to not be able to go to Belmont, I was fortunate enough to be able to dive into a new job at Artemis Racing. Carrying on where I’d left off after TeamOrigin stopped rather abruptly.

I’ll play safe by not going into detail about what we are up to within Artemis at the moment, but it is fair to say it is always pretty busy and has been eventful recently! In the World of wings I’ve managed to upscale rather quickly over the last two years with Moth, Tornado, AC45, and then an AC72 wing on a lengthened Orma 60 trimaran. So all very interesting.

Now we are into a catamaran AC, my personal fleet has expanded to include an A Class to get back into some catamaran sailing. Great fun to learn a new class even if it feels quite slow compared to the Moth. It has had a few mods undertaken already, with plenty more little tweaks planned. 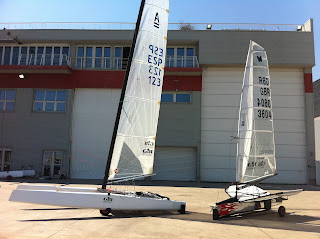 Best of luck to all the Mothies who go to Garda, unfortunately I won't be able to make that one, but plan on Hawaii after the Cup.
No comments:
Email ThisBlogThis!Share to TwitterShare to FacebookShare to Pinterest
Newer Posts Older Posts Home
Subscribe to: Posts (Atom)